You can’t have a traditional Brazilian Churrasco without picanha! Picanha is a juicy piece of meat which is cut from the rump cap muscle. In the United States, some people refer to picanha as sirloin but it is not the same cut of meat as a sirloin steak. Some butchers will call it rump cap or sirloin cap. Just make sure that when the meat is being cut, the fat cap (gordura) on top is not removed. Picanha is very juicy because of the fat cap that remains on during the cooking or grilling process. My family is from Rio Grande do Sul and gauchos are famous for the way they make Brazilian churrasco, so this is the right place for you to learn. We love serving this authentic dish with a big plate of Brazilian Rice and beans with some Salpicao de Frango on the side. We also use the leftovers to make Arroz Carreteiro (Brazilian Rice with Leftover Churrasco Meat). Now that’s a dish you’re going to want to try!

This post contains affiliate links. As an Amazon Associate, I earn from qualifying purchases.

This is what a traditional cut of picanha looks like.

Use a sharp knife to cut with the grain.

The knife should easily pierce through each piece of meat.

The slices should look like the shape of a horseshoe once you are finished cutting.

How To Cook Picanha

Can I Use Different Seasonings?

You may season your meat the way you like it. However, when Brazilians cook picanha for a traditional churrasco, we sprinkle the meat with coarse sea salt only. But you can definitely make this recipe your own and season to your liking. Sometime we do top it with homemade chimichurri as well.

Picanha can be purchased from most supermarkets that have a butcher department. I like getting mine from the Brazilian market by my home. However, if there is no Brazilian market close to you, simply ask the butcher for sirloin rump or top sirloin cap with the fat cap still on. You can purchase the entire piece of meat and cut it right at home if you are worried that the butcher will not know how to cut it.

Cutting picanha is not as hard as it may seem. Hold the entire piece of meat with one hand and a sharp knife with the other. Cut 2 inch slices with or along the grain. You will be cutting from the top where the fat cap is. The slices should resemble a horseshoe and should have the fat cap still attached. Once you have finished cooking your steaks, cut them against the grain into smaller pieces for serving.

You may store any leftover meat from your Brazilian churrasco in an air tight container for up to 5 days. I don’t recommend freezing the cooked meat because I find it to have a tough texture once defrosted. 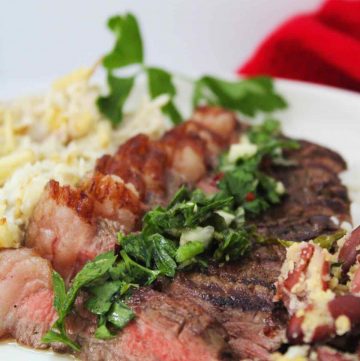